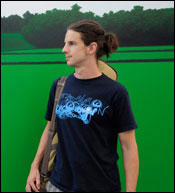 Wolfgang is an educated Western Classical and Jazz musician, with his main focus on the different aspects of the guitar and other string instruments in the universe of musical traditions around the world. Bringing together the sounds of Africa, India, Flamenco and the western world of Jazz improvisation,  he presents a new, truly transboundary style of modern guitar playing and composing.

Since 2003 Wolfgang keeps travelling to India and Spain for musical studies and concerts with local musicians. Currently, Wolfgang is working on his new project “deHiaschn”, merging austrian and african music into something you have never heard before!